The final four contestants (Helen, Tara, Ron, and Mike) left the ranch for 30 days to continue their journey at home and after running a marathon (that's right - a marathon!), they went back to the ranch for another weigh-in.

Tara lost 10 pounds and Helen lost 7 pounds, which was enough to secure them a spot in the finale. GIRL POWER! Although Ron and Mike lost 10 pounds each, their weight loss percentage wasn't enough to place them above the yellow line.

"I absolutely want to be 'The Biggest Loser' now," Helen says. "I never thought I could come this far. Now that I have, there is no stopping me. I know that everything I have inside of me ... the drive that I have ... all of a sudden I am competitive."

Tara has the distinction of never falling below the yellow line all season. "Eighteen weeks ago, if you had told me I was going to make it to the final four, I don't think I would have believed you," says Tara.

The father-and-son team, Ron and Mike, won't learn until next week which of them will be competing for "The Biggest Loser" title. The decision was left to America. Ron asked everyone to vote for his son, even though last season, a similar plea backfired. "My son Michael has worked very hard and he deserves this opportunity," Ron says. "He has been a giver his entire life. He won a couple of prizes: his trip to St. Augustine, he gave to my wife and myself, and his year-long-supply of groceries he gave to Aubrey (a fellow contestant)."

Even though Ron wants his son to be in the finale, Mike said, "I have accomplished every single thing that I wanted to in this competition. I have lost 174 pounds (the most weight ever lost on the ranch). I set out to change my life. I have done that."

Check out this AMAZING 18-week transformation (51 sec.) video of the final four contestants. Very cool. This show is so darn inspiring!

Once the contestants left the ranch and got settled back in at home, they all had problems with either struggling with temptations or fixating on workouts.
Running a Marathon

Just as everyone is settling in back at home, a Biggest Loser box arrives at their doorstep. In it is a video of Alison explaining that in 26 days, they will have to complete a full marathon. "A marathon," Ron remarked dryly. "I don't think I've walked 26 miles in a year." Mike's response was, "Are you freaking kidding me?" I concur. 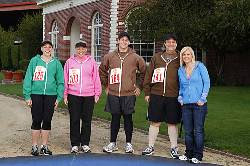 Tara and Helen took the lead in the marathon, greeted by loved ones at the four-mile marker. Ron, with his bum knee, and Mike, with his sore hip, were forced to walk the course.

As the race went on, several past show and at-home winners, from Michelle Aguilar and Ali Vincent to Bernie Salazar and Jim Germanakos, greeted contestants and ran with them for much needed support.

Not surprisingly, Tara won the challenge, clocking in a time of 4:56:24. Helen clocked in at 5:49:09 and Mike completed the course in 8:58. The suspense was waiting to see if Ron would be able to complete the course or not. There was a point that it looked like he was going to be taken to the hospital, as his blood pressure was high. In a determined effort, Ron managed to finish in 13:16:19. For their efforts, each of the contestants received a $10,000 check to give to the charity of their choice.

Since Ron and Mike both fell below the yellow line, it was left up to America to decide which one of them would compete in the finale. I figure America will vote for Ron out of spite. I admit I tried to vote for Ron but I never could get through. Mike's a good kid and I'm extremely proud of everything he has accomplished, but I want Tara to win.

P.S. Tune in on Tuesday, May 12 at 8 p.m. ET for the three-hour "The Biggest Loser" finale, when all the contestants return for one final weigh-in, which will also determine who will win the at-home prize of $100,000.

Felipe Fa Is Not The Biggest Loser

That Tara is a machine, is she not?

I thought Mike would win the title as America's Biggest Loser, since he has lost the most weight. But since he's now hurt, I'm not so sure.

Paul - That, she is! I can't wait to watch the finale tomorrow night!