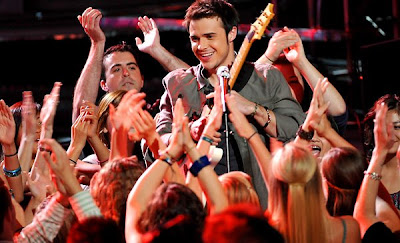 Kala Craun and her son Craig hold signs they made for the Kris Allen watch party at New Life Church on Tuesday.

Kim Duvall, with her daughter Abby, 5, text in her vote to American Idol during the Kris Allen watch party at New Life Church on Tuesday.

All the businesses in town have signs asking people to go to the watch parties or vote for Kris.

Kris' wife, Katy, works at Acxiom (the same place I work) and every week, we get emails saying "Be sure and vote for Kris!"

I went to one of my favorite little shops in town called Just T's-N, last Saturday, and they had tons of t-shirts printed up in several colors with the words "Kick Awesome - Kris Allen" printed on them. Several people were in line buying them while I was browsing. One lady asked what the phrase "Kick Awesome" meant. I listened in on the answer since I was curious too. In an interview, Kris was asked to describe his experience on the show so far and he said that he wants to live life with no regrets and this has been kick awesome. So now the phrase "Kick Awesome" has become the Kris Allen battle cry around town.

I wanted to go to the American Idol official watch party in town last night but when I arrived, there was no place to park. The parking lot attendant told me that if I wanted to, I could park at the church across the street. Well, it was pouring down rain and I could tell by looking at all the cars that it would be standing-room-only, and with my claustrophobic tendencies, I decided to skip the party all-together. I sure did my share of voting though. I had both my landline and my cell phones dialing. Whew!

It will be interesting to see how this all plays out here in Conway, if Kris Allen does indeed advance to the final three of American Idol.

I know all of the kids are rooting for him, so they can get out of school early!