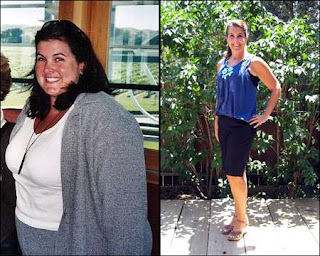 What a beautiful lady. Kymm Hansen, a 37-year-old actress from Julian, California, went from 307 pounds to 164 pounds in 14 months! Kymm went from wearing a size 26 to a size 8!

“I will not be tormented anymore by scales and books that say I’m barely good enough,” Kymm said of her new body. “I’m focusing now on how I feel. And I feel both physically and mentally strong.”

Raised by a single mother who placed a large emphasis on weight, Kymm – who was a slightly pudgy child – recalls watching her food intake as young as 9 years old. When her mother went on a diet and exercise regime, Kymm went on one as well. When peers on the playground cruelly mocked her size, she emotionally retreated. “I had never been a thin child, but I was a far cry from fat,” Kim said. “But that didn’t stop the teasing from both children and adults alike, who called me names like ‘butterball.’ ”

At home, the young Kymm shared a household with roommates who stocked their communal kitchen with high-calorie, fatty foods that became the ultimate temptation. Since she was left alone most of the day and forbidden to go outside due to an unfenced pool, Kymm found herself stealing their food, hiding candy wrappers between couch cushions while watching hours of TV. And so began Kymm’s long relationship with sneaking food. It didn’t help that the roommate, an adult mom, likened Kymm’s size to that of an elephant.

“Having an adult say something like that, when others had already teased me about my size, confirmed in my mind that they must be right,” Kymm recalled.

Kymm’s unhealthy eating habits and guilt followed her well into adulthood. Her weight, along with her self-esteem, fluctuated throughout her teens and 20s. When she finished high school and moved to New York City, she used her newfound freedom to eat even more, whenever she pleased. But the more she consumed, the more she damaged her already fragile self-image and her relationships. At 308 pounds, she was so ashamed of her body that she opted to spend much of her time isolated from her friends and family.

“I was unable to believe that people accepted me the way I was,” said Kymm Hansen. “Comments such as ‘You have such a pretty face’ would be interpreted as ‘It’s a shame we can’t do something about the rest of you!’ ”

Kymm admits she used food for “everything.” It became a source of comfort, a quick solution to boredom, and even a means of further torturing herself. She viewed food as a constant companion that would console her, until it ultimately made her feel worse. Personally attached to her favorite foods, Kymm didn’t know how to quit.

Kymm’s situation escalated when she accepted a position as an instructional aide in her school district. Teachers' staff rooms were often filled with baked goods and homemade casseroles, and Kymm would eat the free treats in addition to the huge lunch she brought to work. To silence her guilt, she adopted a Scarlett O’Hara attitude.

“I knew I was eating too much, but I would always tell myself that I would start watching what I was eating tomorrow. I mean, I was already fat, was one more day going to hurt? So I would be ‘good’ for a day or two and then blow it for a week or two.” It was a vicious cycle that left Kymm even further isolated from her family and social circle. “Food affected every aspect of my life,” she said. “It became all-encompassing.”

Kymm suffered both physically and emotionally from the burden of her weight. Apart from the daily obstacles (the heavy panting and achy back) she was in constant pain from the pressure weighing down on her left foot, which stiffened frequently while walking. Her orthopedic surgeon told her that if she failed to lose a substantial amount of weight, she could look forward to an invasive foot surgery.

But the worst aspect for Kymm was emotional. She hated the feeling that she was wasting her life, that she neglected to fervently pursue her lifelong goal of becoming an actress.

“My life goals were replaced with thoughts of what I would pick up to eat at the store and what movie I would watch while eating it,” Kymm said. “I felt hopeless. ”

Determined to stop wasting precious time, Kymm enrolled in school to pursue a degree in theater arts. But despite her step forward, her problems followed. A year into the program, it dawned on her that she was relatively unknown in her class, primarily because she lacked the self-confidence and drive to give it her all. She had great grades, but few knew her name. And it could all be traced back to her weight, and how people treated her because of her appearance.

“I once held a school door open for two people to pass through in front of me; they walked through and let the next set of doors close on me,” Kymm recalled. “I realized I wasn’t apparent to them. I was virtually invisible, not because of malice, but rather a lack of thought. I wasn’t spending much thought on myself, so why should they?”

Tired and frustrated, Kymm knew she needed to make a drastic change to reclaim her life. The solution came when she was least expecting it:“While watching television as I was eating pizza and a cinnamon roll, an LA Weight Loss commercial came on and it brought me to tears. The woman in the commercial was so happy and I was so unhappy.”

Kymm called right away, drove to the center and immediately signed up. With encouragement from friends and family, she began working toward her goal.

When Kymm stepped on the LA Weight Loss scale, she was mortified to read the number: 308 pounds. But within just the first three days, she lost 6 pounds. “I was hooked,” Kymm said of her early success. “Every week from there on I was losing a minimum of 2 pounds.”

Once Kymm got into the rhythm of restricting her diet to healthy foods, she saw weight loss completely differently - as freeing. She met with her counselors privately three times a week to assess her daily intake and monitor her exercise routine, which she started out by alternating between one to two miles of walking almost every day. After just a few months, Kymm increased her regimen to walking in addition to working out on the elliptical machine every day – which helped her lose 50 pounds. The payoff was twofold: she felt better, and she was finally cast in her first leading role.

She continued increasing and varying her exercise regime in conjunction with watching her diet, and the weight came off at “an amazingly quick rate.” With her mother’s motto of “everything you do is a choice," Kymm committed herself to planning out her meals in a food journal and checking them off each day. After 14 months, Kymm lost a total of 144 pounds and now weighs in at 164.

“I now view food as a way of feeding my body what it needs, not just what my appetite wants,” she said. “When I make good choices, I feel energetic, focused, and healthy.”

In addition to her health, Kymm also credits more solid self-confidence to her new lifestyle. No longer is she ignored or passed over; she is now more willing to put herself out there and express her thoughts or opinions. People treat her differently, and she’s seen a vast improvement in both her friendships and family relationships.

Kymm is thankful for a second chance. She knows what can happen to those who don’t take responsibility for their lives, and now she does all she can to manage the uncontrollable habits she once gave in to. “We are where we are because we made a choice or a choice was made for us, but we stay where we are because we choose to stay,” Kymm said. “Little choices and changes take longer, but they do add up. Even indecision is a choice.”

Check out Kymm's reveal on The Today Show here.

What a great transformation/lifestyle change.

KT - I agree. Kymm's story is inspiring. It always helps me to read about others making positive lifestyle changes.