Last night's show was my favorite so far this season of The Biggest Loser.

It all started out with...

The Wrath of 'The Don' Ron

When Ron got back after the elimination vote, he thanked those who voted to save him. Then he said, "Those who didn't, may you get struck down and die." DIE? Is this guy for real? I mean, didn't Ron vote for Filipe to go home the week before? Earth to Ron: This is a game, you ding dong. There's a whopping quarter million dollars on the line! What an idiot. But now on to my favorite part of the show...

The contestants walked into the gym and saw Alison Sweeney standing among 100 silver platters. Alison informed the players that this would be a temptation challenge and that they would all be competing for the biggest prize in Biggest Loser history. Most trays contained high-calorie foods, a few contained Extra sugar-free gum along with a cash prize, but only one tray contained a golden ticket which would empower the person who finds it to have the one and only vote at this week's elimination. Alison told the contestants that they could choose not to play but if they wanted to win a prize, they had to eat whatever they found inside the silver platter.

They all hesitated when Alison said 'GO!' but eventually they started meandering among the silver platters. Laura opened up her tray and found a 100 calorie Coke she had to drink; Tara had to eat a 520 calorie cupcake; Kristin had to eat a 338 calorie pretzel; Every time someone ate or drank, Alison would shout out the calorie content of the things they were eating or drinking. Ron's first two platters contained cash prizes - the first one for $500 and the second one for $1000. After they had blown through over 50 silver platters, Laura finally found the golden ticket. She hooped - she hollered - she went plum crazy! Oh yeah, before she found the golden ticket, Laura also found a tray containing $5000 dollars. Now, that - I would have went crazy over.

I cracked up when Helen said, "That pretzel is going to stick right to my ass. That's what's going to happen." HA! The way she said it was hilarious.

Here's the breakdown of what the contestants ate in calories:

Tara ate 4600 calories worth of junk food! She said she wasn't going to let anything - and I mean ANYTHING - get in her way of finding that ticket. Lucky for her, Tara's teammate, Laura, found the golden ticket. Tara was ecstatic! Kristin decided to stop eating after a couple of high-calorie silver trays. She decided it wasn't worth eating all those empty calories and risk falling below the yellow line.

After the challenge was over, Bob and Jillian walked into the gym to find the contestants picking up the silver platters strewn all over the floor. They all got a good chewing out from the trainers about how pitiful they were to participate in such a challenge and then suffered through the 'Trainer's Revenge' workout.

Later, Bob asked his team how the elimination vote went down. Ron told Bob that Filipe, Sione, and Helen voted to send him home. I thought it was funny when Bob said he would never want to be on Ron’s bad side. What amazes me is that everyone on the ranch is scared of him. They have two nicknames for him: The Godfather and Hatchet Man. Tara said, "I'd be afraid if I were Sione and Filipe. They might find a horse's head in their beds." Hehehehe! That cracked me up. In the background you could hear Godfather music playing.

The contestants met Alison at the Rose Bowl stadium in Pasadena, California. The players were told they would have to run the stairs - boys against girls. The first two to get their colored flag to the 50-yard line would have a face-off by doing the drill again. The winner of the challenge would win a four-person two-week trip to the Fitness Ridge Resort and Spa in Ivins, Utah. The face-off ended up being between Tara (who else?) and Sione and as expected, Tara won the challenge. GIRL POWER!

What an awesome week for Laura. She won the golden ticket plus $5000 dollars, was served breakfast in bed by Kristen, and then to top it off, she lost the most body weight percentage! Weigh (I mean way) to go!

Laura's Got The Power

Sione told Filipe that should he be the one to leave that he has to win for him. Filipe told him that he loved him and then they did a traditional Tongan dance in their room. 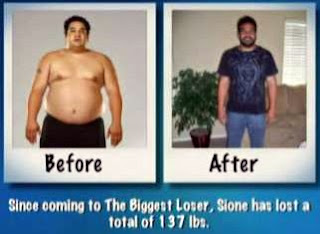 Laura told Helen and Sione that shewas doing what is best for her right now. Since Helen has been there for her every step of the way in the game, she decided to send Sione home.

Sione Fa, a 28-year-old landscape owner from Mesa, Arizona, is in the process of becoming a personal trainer and will soon be certified. Sione's "Where Are They Now?" video shows him training members of his family.

Sione weighed 372 pounds when he arrived on The Biggest Loser campus and now weighs 235 pounds for a total of 137 pounds lost!