I can't say I was surprised to see Aubrey voted off. Two weeks ago, her sister, Mandi, was sent home and I don't think Aubrey, a 28-year-old education specialist from Gooding, Idaho, made a whole lot of friends while there on campus.

For week twelve, the contestants were given newly fitted t-shirts in their original colors and told there was no more black and blue teams but that: (#1) they would be competing as individuals for the remainder of the competition and (#2) they would get to choose their own trainer. The only surprise was Aubrey switching her trainer from Jillian to Bob.

Highlights of the show:

The NASCAR challenge was cool. In the first part of the challenge, the contestants were shown blocks that represented the amount of weight each had lost. The players were told that they could distribute their lost weight to the players of their choice. Naturally, most added weight to Tara's pile (257 pounds in fact). Tara had a boo-hoo session and

said she didn't want to play anymore and was planning on sabotaging herself at the weigh-in. Laura talked her down and all was well once again. Oh, the drama! The second party of the challenge was revealed the following day. The contestants were taken to the Auto Club Speedway and there they saw race cars lined up (the same color as their shirt and with a picture of their face on the hood). They were told that they would not only have to push their car (which weighs a couple of tons) around the track for a half mile but they would have to haul the weight that was given to them in the first part of the challenge. So with Tara having the most weight, she felt that she probably wouldn't win but was determined to do her best. Here's the shocker...SHE WON! The woman is absolutely amazing. As the winner, she got to ride in NASCAR champ's Clint Bowyer's race car. That was cool to watch. Tara also won a VIP pass to an upcoming NASCAR race best of all... immunity at the weigh-in.

At the weigh-in, Tara needed to lose 4 pounds to win the title of the first woman to lose over 100 pounds on The Biggest Loser campus. Unfortunately, Tara came up 1 pound short. However, Kristin managed to grab the title by losing 8 pounds, for a total weight loss of 105 pounds! 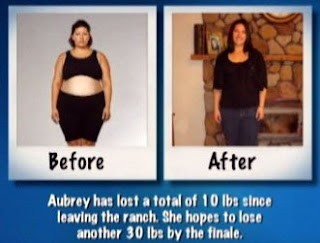 After the weigh-in, Aubrey and Filipe fell below the yellow line. It would have been an extremely smart move to vote Filipe off since he is by far the bigger threat. But noooooo! They decided to keep Filipe and send Aubrey home. Go figure.

Once Aubrey returned home, she let herself fall back into old habits and after only being home 3 weeks, she gained 9 pounds. It was at that point Aubrey realized she needed to form a plan and stick with it in order to reach her goal. She persevered and lost those 9 pounds plus 10 additional pounds, for a total weight loss of 73 pounds!

You can watch Aubrey's "Where Are They Now?" video here.

Labels: Aubrey Cheney Is Not The Biggest Loser