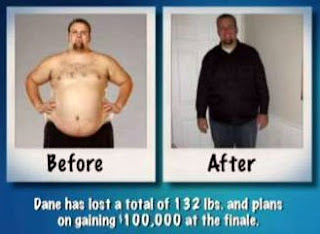 I was surprised to see Dane voted off last night. I felt sure it would be Ron, with him having a bum knee and all.

At this point in the game, it would make more sense to vote the weakest player out and wait a few weeks before sending home the toughest competition.

Ron lost only 5 pounds this week. Compare that to Dane, who lost an amazing 13 pounds, for a grand total of 100 pounds lost in eight weeks (a Biggest Loser record)!

Dane Patterson, a 27-year-old real estate appraiser from Mesa, AZ, weighed 412 pounds when he first arrived on The Biggest Loser ranch. He lost 100 pounds while at the ranch and at the showing of his "Where Are They Now?" video, he had lost a total of 132 pounds!

This week was interesting because all the players competed in a challenge that resulted in everyone trading in their couple-team t-shirts for either blue (Bob) or black (Jillian). One member from each team participated in the challenge. The first-place finisher, Tara (of course), got to choose which team she wanted to be on (she chose to remain with Jillian) and the remainder had to put their fate into the hands of a coin toss.

Jillian kept Tara and Laura, gained Sione, Felipe, Mike and Helen but lost Dane, Mandi and Aubrey. Jillian to Felipe: “I don’t care if one of your legs falls off or one of your lungs explodes.”

Bob kept Cathy, Kristin and Ron, gained Dane, Mandi and Aubrey but lost Sione, Felipe, Mike, and Helen. It was kind of humorous watching the cry-fest of Bob holding onto Sione, Felipe and Helen. Bob: "This is the hardest thing I have ever been through on The Biggest Loser."

During the weigh-in, Cathy (Mom on the purple team) was the biggest loser, dropping an amazing 14 pounds! She was thrilled since she only lost 1 pound last week. Cathy's daughter, Kristin, also pulled a huge number - 10 pounds. Tara (the machine) dropped 11 pounds, out-losing everyone else on her team.

The two teams competed against each other with a 24-hour bike challenge. The black team won with Tara logging an amazing 58 miles! She out-did all the guys. I'm telling you, she's a machine! For the black team's prize, they won a 3 pound pass at the weigh-in.

Following is Dane's "Where Are They Now?" video transcript:

"My weight got in the way of doing the things I wanted to do with my family.

I was always a physically active person. I loved to go hiking. I loved to play sports. And when I gained the weight that I did, it stood in the way of that.

The ranch is kind of a place where it's really hard to fail. You know, I lost a hundred pounds in eight weeks. It took a lot of work for me to get there but it was easier there. Now I'm at home, any weight that I lose at home means a lot more to me.

After being on the ranch, I've made working out and being healthy one of the main priorities in my life.

When I first arrived on the ranch, my wife started training for a marathon. When I got eliminated, I realized the opportunity I had to run that marathon. At the time, I really didn't know what I was getting myself into. But I knew if I committed for it I would have to do it.

It was one of the most amazing experiences of my life to be able to run side by side with my wife for an entire marathon.

Crossing the finish line, I couldn't help but get a little emotional. I mean I usually don't show my emotions a whole lot but I felt a little bit teary eyed - just that feeling of completing such a hard task and the fact that I was there with my wife."

Dane's wife: "It was an emotional moment for me. It wasn't just a race for us, it was more than that. What we did today symbolizes what our future's going to be like. "

According to this article, Dane and his wife did not complete the marathon. Instead, they were picked up by a van along the course and dropped back down somewhere prior to the finish and then he crossed the finish line. Neither was listed as completing the marathon. I don't know why people can't be honest. Anyway, he and his wife did run 23 miles which is a heck of an accomplishment.

Sounds like quite a show. That's a lot of weight to lose in eight weeks. Wow.

I don't know why folks can't be honest either. It sure is easier in the long run. No pun intended.

I can't believe Dane got voted off! I didn't see the weigh in, but I did see the night before when they did the competition and the team switching. It's only going to keep getting tougher, and there's no way Ron's going to make it. Dane deserves to be there in my opinion.

This year has been strange in many ways. It is as if they are less playing the game, and more really caring for one another, which would explain Ron staying.
He needs it more as he has less home support than Dane.

Why in the world would anybody want to run a marathon?

It makes your heart rate go up, you sweat, you get tired, and more!

Sandee - Yeah, it's a very inspiring show. I have enjoyed watching it the past several years.

Sadie - I was shocked too! No, Ron won't make it even close to the end. I wish Dane could have hung on for at least another week.

Da Old Man - I know! It's a nice change isn't it? Not smart though. The blue team needed Dane to compete with the black team. Oh, well...

Paul - I'm impressed with anyone who has done it but I'll never run one or even half of one!

To be honest, Dane actually didn't complete the marathon. He was picked up somewhere near the 20 miles mark and driven to the finish line. The television show says he was driven 3 miles, another runner says it was more like 9. The TV show has already issued an apology. I'm not saying he hasn't made some awesome progress, but it's important to note this in light of his statement that he wants to do "many more marathons". He needs to finish one, first.

If you want to know more here it is
home based business opportunity
www.home-businessreviews.com

Gals
You have got to see this. Obama playing on XBox. Funniest video ever. http://bit.ly/bllhx1