Blaine Cotter, a 27-year-old college counselor from Gilbert, Arizona, started The Biggest Loser weighing 365 pounds. At the filming of his "Where Are They Now?" video, Blaine had lost 86 pounds, which put him at 279 pounds.

Blaine only lost 4 pounds this week. Add that to his cousin, Dane's, 5 pound loss and it's not hard to see why the black team fell below the yellow line. Big guys like that usually lose double digits each week.

Blaine begged the other contestants to send him home, as he was terribly homesick for his family (his wife had recently given birth to their fourth child). The contestants granted him his wish and voted him off the show.

Some things I learned or 're-learned' from last night's show:

1. With proper motivation, you can achieve amazing things. Case in point: Laura was having trouble with her boxing technique. But when Jillian instructed teammate, Tara, to slap Laura on the face if she didn't use proper technique, suddenly Laura did it correctly. Another example of proper motivation is my son, Dylan. We were weary of always having to remind him to do his chores. Once we explained to him that we were going to give him a list of his chores and charge him $5 every time he failed to do one, suddenly, we weren't having to remind him anymore! Now his chores are being done every day without fail! It's all about proper motivation! :)

2. If you don't eat enough calories (for your weight/height), it may hinder your weight loss, by slowing your metabolism. Case in point: 18-year-old Mike and his dad, Ron, had fallen beneath the yellow line for two weeks straight. Come to find out, the main reason was because Mike was not eating the recommended amount of calories each day. Mike confessed to trainer, Bob, that he had a mental hang-up. He believed that cutting out calories would make him lose more weight. Bob asked him, "So how's that been working for you?" Consequently, Mike ate the amount of calories he was supposed to and lost 13 pounds! 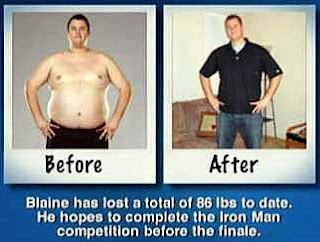 Following is the transcript from Blaine's "Where Are They Now?" video:

"When I started on The Biggest Loser campus, I weighed 365 pounds. Now I'm down to 279 pounds.

The mentality before I went to campus was, 'I am an overweight big dude. That's just who I am and I'm okay with that.' But I learned there that I'm much happier and I'm a much better person being healthy. Not necessarily being thin versus being fat but being healthy versus unhealthy.

I feel fantastic. I've never felt better in my life. I have more energy, I'm happier, I'm better with my kids, I'm better at work. I've just become a better person. I can't believe how much my weight was slowing me down.

My weight never really got in the way of my life, it just got in my way. It stopped me from being confident.

The biggest thing I learned while I was on The Biggest Loser campus, was that I can reach down inside me and make me do things that are difficult. And so, my goal has turned into an Iron Man. I want to do an Iron Man before I go back for the finale.

To get ready for the Iron Man, I have a very strict schedule. I have to get up early, ride my bike to the gym. It's over a mile and a half of swimming, 80 miles biking, and a half marathon after that. A man and a half to an Iron Man, that's not bad - even if it is a half Iron Man, I'll take it. It's quite the feat but I'm looking forward to doing it.

While I was on the ranch, I lost 66 pounds and I want to lose another 66 pounds here."