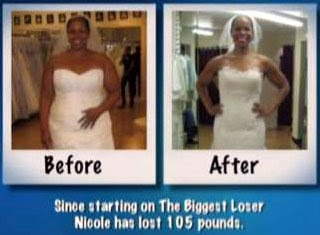 Nicole Brewer, a 37-year-old wardrobe stylist from Brooklyn, New York, is engaged to Damien Gurganious. Nicole was sent home at the end of the first week of The Biggest Loser. You can watch Nicole and Damien's first "Where Are They Now?" video here. At that time, Nicole had lost a total of 76 pounds. Nicole's second "Where Are They Now?" video shows how she looks after losing a total of 105 pounds!

Ali Vincent, season 5 winner, guest-hosted the show since Alison Sweeney recently gave birth. Ali won the title after being sent home for five weeks, so she was the perfect choice to introduce Estella, David, and Nicole, who were sent home at the end of the first week of competition and never returned because their partners had been eliminated.

It was easy to see which one would win the scale-war and you could tell the other contestants were scared stiff. Since arriving on the ranch, Nicole has lost a mind-numbing 87 pounds, amounting to a 32.34% percentage loss - second only to Tara. As a result of the weigh-in, Nicole was also given immunity at the next weigh-in. Immunity? Well, how did she get voted off then, you ask? She gained 5 pounds! I know, I couldn't believe it either. I didn't know immunity was contingent upon how much a player weighs.

Highlights of the show:
Thanks for reading!

Labels: Nicole Brewer Is Not The Biggest Loser...Again

Wow she lost a lot of weight! I envy her.

By the way, you are one of the top ten droppers for the month of March. Thank you so much and i hope you keep coming by. :)

I haven't watched the biggest loser in quite awhile, but I really do like the show. I keep missing the beginning of the season and I really like to watch from day one.

Her 'after' looks amazing! Good job for her!

Whether she is a winner or not, she definitely looks happier in the second photo and that is the most important. I believe she will be able to reach her goal of a size 8.

Nicole can be very proud of her weight loss and she did almost all of it from home. I felt so sorry for her when the scale betrayed her back at the ranch.

Arlene - She sure did! Thanks for the Entrecard recognition. :) I appreciate your drops too!

Petula - Yeah, I can relate. I missed the first couple of shows this season and it bummed me out but I like the show too much to stop watching it. I now tape it since I like watching American Idol too. That way I can play the tape back and catch what I missed.

BK - I believe she will reach her goal too. Although I think she looks terrific wearing a size 12.

Chris - Me too! I was excited that Nicole gave Tara some needed competition and then POOF! she was gone. I still immunity should mean immunity - regardless of whether you gain that week or not.

She has done really well!! Although I think a size 8 may be taking it a little too far. She looks amazing the way she is

Shu Fen - Thanks for stopping by! Good luck with your weight loss goals. :)

Wow she did well didn't she? We have this TV prog in the UK now but none of the contestants have burned anything like as much fat as the US peeps :)