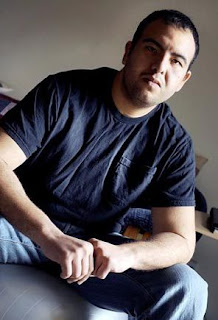 Ulysses Milana, of Lewiston, lost 140 lbs., down from 330, to accomplish his goal of enlisting in the U.S. Marine Corps. Milana lost 20 pounds per month over the past year by changing his eating habits, going to the gym and giving up beer.

Can you say INSPIRING? Wow, this guy is something else.

Army and Navy recruiters took one look at 330-pound Ulysses Milana, in December 2007, and told him to forget about joining. "You've got to lose weight," Milana remembers them saying.

But Marine recruiters were willing to help 23-year-old Milana by developing a workout regimen.

"You can sit there and preach and preach, but if you're not willing to help, then it doesn't lead you to success," Staff Sgt. George Monteith said. "If I say, 'Go lose weight and I'll see you in a year,' then what kind of help have I offered to make that happen?"

It wasn't easy, Milana said, but he managed to slim down through exercise, healthier eating habits and giving up beer.

Milana said he always wanted to follow in his family's footsteps by serving his country. His wife, Latoya, also comes from a military family.

A former culinary student, Milana said it was a challenge to give up favorites like pizza and hot wings, but cracking open a cold beer after work was perhaps the toughest guilty pleasure to abandon.

"It was really hard. You see all your friends drinking beer, and you're like, 'Oh, man, I want one,'" he said. But his determination kept him on track, and he would head for the gym or don a head lamp and go out for a run.

The story of Milana's 140 pound weight loss has become a sensation. He's receiving fan mail from around the globe. In Maine, his wife, Latoya, finds her phone flooded with offers for movies, documentaries and even a weight-loss product endorsement. Her husband's MySpace inbox overflows with nearly 200 messages and friend requests.

Since Milana is only allowed to contact family via regular mail during the grueling two months of boot camp, Latoya said her husband isn't even aware of the national stir his story caused since he left.

"He has no idea, really," Latoya Milana said, adding that she was awaiting a letter from her husband with his contact information. "

Since Milana's story ran last Monday, Nov. 17, on the front page of the Sun Journal, staff at the paper and the family have received e-mails, phone calls and requests from everyone from fellow Marines to television producers wanting to touch base with the young man they say inspired them.

Latoya responded to each e-mail sent to her husband on his MySpace page. She points out that no two are alike and she wanted to reply personally to people who took time to thank Milana for his inspiration.

Given that Milana has no contact with the outside world at this point, Latoya wonders how he will react when he learns about the publicity he's gained, and about the movie offers. She said her husband, whom she has known for eight years, is one of the most private people she knows. Latoya also stressed that her husband lost the weight to realize his dream of joining the armed forces, not to gain fame and fortune.

"He likes to help people and he likes to inspire people, and I'm not even sure he realizes how much he did that," Latoya said. "I'm proud. I'm very, very proud that my husband was able to inspire so many people."

Sources: The Seattle Times and SunJournal.com

Brady Vilcan Is Not The Biggest Loser (but he has lost 100 lbs!)

Phillip Parham Is Not The Biggest Loser (but he has lost 106 lbs!)

WOW! That is definitely something to be proud of. He can really inspire a lot of people. Who knew that weight loss could bring so much publicity?

That is a fantastic story. It takes a lot of determination to lose that much weight for any reason, much less to do so to serve his country. My hat is off to him and I wish him all the best. Thank you for serving this country...stay safe.

Imitation Angel - I know! It's awe-inspiring. It just goes to show once again that if you're really determined to lose the weight you can do it.

Tahtimbo - It's such a great story. I'm glad you liked it too.