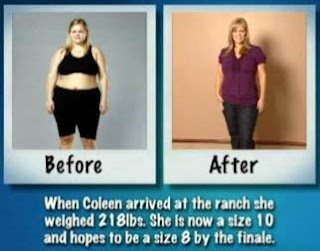 Unfortunately, Coleen only lost 3 pounds this week, which made her drop below the yellow line.

'Icky' Vicky Vilcan, was also below the yellow line - in large part because she received a one pound penalty (bestowed upon her by Michelle).

Amy C. was the swing vote and I just KNEW she would vote Vicky off the show but noooooo! For some reason (I can't figure out), she decided to send Coleen home. I was shocked and appalled. In my opinion, Amy C. had nothing to lose and everything to gain by voting Vicky off. No matter who she voted for, she was going to be in a precarious position (being on the blue team with members that don't care whether she stays or goes). Why not get rid of the thorn in your side? I mean, the girl (Vicky) made Amy C's week a living hell. If Amy C. drops below the yellow line next week, she's gone. She's now made enemies with both the black and blue teams.

Coleen started The Biggest Loser weighing 218 pounds. Nine weeks later and 51 pounds lighter, she left the show weighing 167 pounds. Coleen's goal is to weigh 147 pounds and be wearing a size 8 by the show's finale.

Following is the transcript from Coleen's "Where Are They Now?" video:

When I started The Biggest Loser, I was in a size 22 pants and now I'm in a size 10 and it's so incredible to even say I'm in size 10 pants.

Before The Biggest Loser, my dad I - we just didn't work out. It was not in our scheduled daily kind of life. We sat on the couch. We ate horrible, crappy food and didn't really care what we were doing to our bodies.

For me, working out with my dad is just so very special because the first week we arrived at the ranch, my dad was so unfit he couldn't even walk on the treadmill. And now, he can run, he can bike, and he can do anything and that's fantastic.

When I weighed 218 pounds, my clothing selection, was first of all, slim to none... I mean, completely frumpy. I dressed way older than I was and confused people when I told them I was only 23 years old.

Before coming on The Biggest Loser, I always dreamed about being able to just buy an article of clothing off the rack - not even have to try it on, just know exactly what size I wanted to wear.

The first time I put on a pair of size 10 jeans, I thought someone actually misplaced the tag on the jeans and I couldn't believe that they were mine. I mean, I was literally shocked that a pair of 10's fit on my body.

It's okay to dream the impossible dreams. I don't know, it's just like before, I never ever thought they would happen. There's just absolutely no limits now. I mean, nothing can hold me back. Nothing can stop me from reaching my dreams.
-- Coleen Skeabeck

It was just weird Biggest Loser gamesmanship. Maybe she was trying to get back in good with blue by voting with them? Still, it makes no sense at all.

I missed this episode but Coleen looks very good.

I was shocked she didn't vote Vicky off too. I like your name for her, I call her something entirely different.... That woman is whacko!

I think Coleen looks great. She is such a sweet girl, I wish the best for her.

I was sad that Coleen got voted off. She was nice! And she is looking great.

Just inspirational to see people do this. Voted off or not. Congrats to them.

Kelly - Vicki is the DEVIL! :) Just kidding but she is awful. I really like Colleen too - I hated to see her get voted off.

Bartolomo - You're right. This show is a great inspiration to me too.