The Craziest Thing I've Ever Done 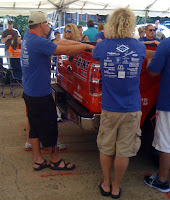 Well, I didn't win anything, but I did accomplish something. If anyone ever asks me, "What's the craziest thing you've ever done?" I can tell them, "I was stuck on a truck for 62.5 hours!"

I went into the competition prepared to win. Along with my shorts and 'Stuck on a Truck' t-shirt, I wore compression socks (much to my husband's chagrin) . I bought a back brace, though I never had to use it. I had three pairs of tennis shoes, a pair of Timberland's and a pair of Crocs flip flops to rotate throughout the contest. But the most important thing I did (and the reason why I hung in there for 62.5 hours) is I snacked on low-carb, healthy foods, drank mostly water, and took lots and lots of BarleyLifeTM.

I also had an amazing pit crew. I know I wouldn't have lasted more than 24 hours without them. My pit crew members were my husband-Paul, my daughter-Rachael, my son-Dylan, my mom, Joloyce, my sister-in-law-Cathy and my brother-Jeff. They made sure I had something to eat and drink and was rested. They also sat in the bleachers and interacted with me, to keep me awake and alert.

I took my first nap at twelve midnight, Sunday morning, on one of my fifteen minute breaks. My husband told me he would wake me up two to three minutes before it was time to get back on the truck. Instead of the nap refreshing me, it unsettled me more than anything. When I got back on the truck, I was shaking from head to toe.

Then about fifteen minutes later, the bank staff informed us that due to the thunderstorm, they were moving us inside the bank for safety reasons. We then all laid down on the floor and went to sleep.

Two hours later, they woke us up and led us back to the truck. By this time, my feet were killing me. All I could think of was that I was in pain. I felt miserable. Shortly after returning, I took both hands off the truck... I was done. My husband and daughter were there to take me home. They both said I acted like I was drunk. I don't remember much about those last few moments.

'Stuck on a Truck' was a great experience, though I will never do it again. I was told by a good friend of mine, Tim Secor (previous Stuck On A Truck competitor), that competing in this contest would be the hardest thing I have ever done. He was right. It was so much harder than I could have ever imagined!

I thought I was tough and I guess I still am. But I can't be stuck on a truck long enough to win one. As I write this blog post, there at twelve people still 'Stuck on a Truck'. Almost eighty-six hours... unbelievable!

Since coming off the truck, I have slept twelve hours. I'm still not caught up though, so I'm going to bed to get some more sleep!

© 2011 Thanks for taking the time to read A Junk-Foodaholic's Journey to a Healthy Lifestyle. Please feel free to peruse my blog for more great content.Mine and My Husband's Other Websites: HealthyPickyEater.com | PaulsHealthBlog.com

Laura, you are one of the strongest people I know. Your will and drive during this contest was unbelievable. We are all so very proud of you!! Love you!!

I never realized how traumatic those contests can be. Wow 86 hrs with only mini breaks. You really have to be mentally and physically ready. Have you woke up yet?

Laura, you are nothing but an inspiration! So strong person i admire you!

Laura, I can not believe that you were actually on that truck for 62.5 hours, you really are an incredible and courageous woman and able to overcome many obstacles. Congratulations once again.