Okay, I confess I was out bike riding when The Biggest Loser was on Tuesday night. I had the VCR (I know... I'm way behind the times) set to record so I was able to catch up on what I missed.

I've been so busy that I just now watched the first hour of the show. Turns out I didn't miss much. 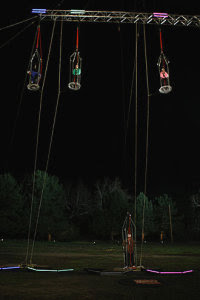 The only thing I enjoyed watching was the contestants participating in the Cage Challenge. Naturally, Tara won. But the fun part to me was when Filipe started shaking his cage which made everyone's cage move. See, they were inside a cage that was suspended by a crane, 45 feet in the air! So anyway, I started cracking up because Helen and Kristin were freaking out and yelling at Filipe. Helen threated to kick Filipe's backside. Kristin was stone-faced just struggling to stifle her fear and hang on for dear life.

Mike was the first to fall. He said he was afraid of heights so he wasted no time letting go of the rope. Oh yeah, I forgot to tell ya. They had to hold onto a rope that was supporting their own weight. The Ron Don was next to go as he was adjusting his hand and the rope slipped. Rowdy Filipe was bent over so it was obvious he was having trouble. He was doing all the yelling and shaking to try and make others slip because he knew he was about to go down. Sure enough, he was next to fall. Three guys on the ground, three gals in the air. Girl Power!!! Kristin was next to fall, then Helen and of course, Tara won.

What did she win, you ask? Only $10,000 smackers! She was told she could either take the money -- or -- trade it in on a one pound advantage at the weigh in. I'll save you the suspense and tell you, she took the money. Turns out, she didn't need the one pound advantage either. But honestly, who is really surprised at this point? The girl is a MACHINE!

The rest of the show was pretty boring, in my opinion. Helen and Kristin fell below the yellow line at the weigh-in. Helen lost a pound, which wasn't surprising as she had lost a whopping 7 pounds the previous week. Kristin, on the other hand, gained a pound! Eeeeks! That's a killer every time. Sure enough, Kristin was voted to go home. It ended up being a tie vote. Ron and Filipe voted for Helen to leave while Tara and Mike voted for Kristin to go home. Since Kristin had the least body weight loss percentage, she had to go.

I found it humorous, when Kristin said she felt sad for Mike because he took the coward's way out and eliminated his competition instead of going head to head with her. What part of the word "game" does Kristin not understand? Mike made a smart move and that's all there is to it. I mean, there's a quarter of a million dollars going to the winner of this thing!

I did think it was cold however, for Ron to play Kristin the way he did. He was all like, "I promised your mother I would keep you in the game... Blah Blah Blah Blah." And then, behind her back he tells Mike, "You know, Kristin's your biggest competition." Then he gives Kristin a shocked look when he sees that his son voted for Kristin to go home. Give me a break, Don Ron! That's just wrong anyway you look at it. Shoot straight or shut up! 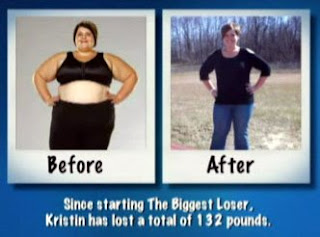 Kristin Steede, a 29-year-old business owner from Greenville, Wisconsin, was the heaviest woman ever to compete on The Biggest Loser. She arrived on the ranch weighing 360 pounds and she weighed 244 pounds when she was voted off the show. In her "Where Are They Now?" video, she announced that she weighs 215 pounds for a total weight loss of 145 pounds! Kristin's goal is to eventually get down to 180 pounds and I have no doubt that she will reach her goal.

Kristin is excited that she now has the opportunity to 'pay it forward' by sharing what she's learned with others. Kristin's "Where Are They Now?" video made me cry it is so inspirational. Check it out here.

I can hardly wait to see how everyone looks at the finale, May 12th!

I saw the end of the show, and thought that Kristin showed a lack of class with her reaction to getting voted off.

I'd have voted her off in a heartbeat!

As for Ron Don, they all seem to look up to him for some reason. He should have voted for Kristin to go home, and do what's best for his son, Mike.

The other crap by Ron Don was a fake nobility thing, if you ask me. Almost like he was talking out of both sides of his mouth.

I was sad to see Kristin go, I really like her, but it IS a game and I was surprised they didn't vote her out the week before.

Paul - I agree. Kristin should've put on her 'big girl' pants and took the votes in stride. She accomplished great things while on the ranch. And you're right about Ron too. He should've told Kristin that he was going to vote for her to go home and leave it at that.

Kelly - I like Kristin too. She's such a sweetheart! But you're right - it's a game! You win some and you lose some.

China and Russia put the blame on some screwed up experiments of US for the earthquake that happened in Haiti.
Chinese and Russian Military scientists, these reports say, are concurring with Canadian researcher, and former Asia-Pacific Bureau Chief of Forbes Magazine, Benjamin Fulford, who in a very disturbing video released from his Japanese offices to the American public, details how the United States attacked China by the firing of a 90 Million Volt Shockwave from the Americans High Frequency Active Auroral Research Program (HAARP) facilities in Alaska
If we can recollect a previous news when US blamed Russia for the earthquake in Georgio. What do you guys think? Is it really possible to create an earthquake by humans?
I came across this [url=http://universalages.com/hot-news/what-happened-in-haiti-is-it-related-to-haarp/]article about Haiti Earthquake[/url] in some blog it seems very interesting, but conspiracy theories have always been there.

Coach is a topping American designer of luxury goodies, clear from handbags coach handbags to jewelry and sunglasses to shoes. The coach gives 1 of the most popular and brilliant designer handbags and accessories on the market name. They are distributed through Coach 400 stores and more than 1200 joint U.S. retail. As a result of solid marketplace competition, [url=http://www.discountoncoach.com]coach online store[/url] website, as well as retailers are promoting and offering Coach handbags outlet coupons for reduced prices. These coupons are emailed to customers or it can be exploited by visiting the discount coupons offered by the company websites. You can easily find websites offering a Coach Outlet Coupon through the popular search engines. What you need to do is simply type the words "Coach Discounted Coupons" and you will get a list of sites from where you can avail promotional or discounted coupons for the purpose of buying purses and handbags of you desired brand. Some other search terms which can help you to find out a Coach Outlet Coupon include "coach shoes discount", "coach coupon codes", "coach promo codes", "coach discount handbags", "coach promotional codes", "coach purses discount", "coach bags discount", and "coach bag coupons".

I am new here..First post to just say hi to all community.

Do you need a professional office cleaning service?

We excel in spring cleaning.

thanks for adding me to the forum[url=http://spchierichetti.altervista.org/forum/index.php?action=profile;u=2548
].[/url]

Be assured. I have a nice fresh joke for you people) What makes a bowling alley so quiet? You can hear a pin drop. [url=http://buy-vigara.info/vigera/site_map.html][size=1][color=white]vigera buy online pharmacy [/color][/size][/url]

I use it everyday

Completely I share your opinion. In it something is and it is good idea. It is ready to support you. Do you want a joke? :) Where does all the pepper go? No one nose. vigera
generic cheap

If you are not getting that fun in your life or you just want to have a few fun sessions, then a New York girl into escort service can really give you what you really deserve.
Escort girls New York have surpassed all other escort girls out there with their A1 services.
All you have to do is to open the website of an escort agency, browse through the various escort categories and make your choice after going through the listed profiles.
You can easily book the Bijou and she will always arrive at the right time at a designated place. Even a very short notice can do the job for you. Complete satisfaction is guaranteed, both in mental and physical terms. If you want to hang out with a simple and adorable girl, you will get it. On the other hand, if you want to go out with a girl this is also perfectly possible. You don't have to worry about privacy matters because there are no doubts about the professional integrity of New York independent escort. Before introducing them to the clients, all the credentials of Bijou are properly checked.
[url=http://bijouescorts.com]CT Escort[/url] The growing popularity of a New York escort agency has been the outcome of a number of factors. First, a New York based escort agency believes in offering only the most exciting range of escort fun. Secondly, the rates that such an escort agency charges always comes under one's budget. Thirdly, instant access of girls in and around New York has been another major contributing factor in its success.

New York Escort services are a benchmark in the field of escort services. It is one of the most spoken and hottest services ever experienced by people. The services offered by the hottest and glamorous ladies of New York are often admired because of their truly sensual companionship. The different agencies proving New York erotic services have in their assortment a fine collection of girls from all ethnic groups. But, among the finest ladies, the Asian escorts are the most happening one.
http://bijouescorts.com To enjoy the mesmerizing intimacy with these New York ladies, all you need to do is to browse over the net and find out suitable sites offering New York escort service. You can make a call or book online for New York escorts and the most consistent, top-notch and enjoyable services will be offered to you. Men will always be men and they would never compromise on the fun quotient if they have the will and the cash. If you are a man and for you fun has the highest value among all, then you can never miss out on the opportunity of spending some quality time with any of the Elite escorts New York girls. These girls are very beautiful and their services are conceived exclusively to meet your individual preferences. Based on your budget, you can now select an escort girl in any place surrounding New York.

You should visit [url=http://www.eroticwebcams.net]www.EroticWebCams.net[/url] if you want to enjoy the best adult webcams.